I had recently been told to watch the Carter Effect on Netflix.  Of course, I was instantly in.  Everyone my age absolutely LOVES Vince Carter.  His dunks transcended an era.  He was part of one of the most famous dunk contests in history.  He provided one of the best YouTube dunking videos on the internet with just the perfect song.

He was one of my favorite NBA players growing up so I thought I knew a decent amount about him.  Folks, I was wrong.  This documentary was fantastic and filled with fun facts.  Here are some of the things that fascinated me.

Tracy McGrady and Vince Carter did not know they were cousins when they were on the Raptors.  Vince’s mom told a story about how Vince and Tracy were at summer workouts during Tracy’s rookie year.  Tracy said he wouldn’t be there one day because he had to attend a family reunion.  They mentioned the grandmother’s name and Vince’s mom then put it all together.  Vince Carter and Tract McGrady were cousins and had no idea.  That is BANANALAND.  Two of the best NBA superstars from their era not knowing they were related is just amazing.  God bless them.

Vince Carter was actually drafted by the Golden State Warriors.  He was traded to the Raptors before he even got off the stage.  Picturing Vince in a Warriors jersey just isn’t right.  I had no idea he was originally drafted to Golden State, that would have been wild if he stayed there. 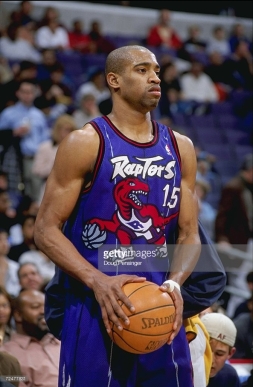 This jersey. One of the coolest jerseys in NBA history was once laughed at.  Just another thing that blows my mind.

Here is one thing that I don’t think people talked about enough.  Vince Carter had some of the coolest nicknames.  Vinsanity. Air Canada. He was nicknamed after the largest airline in Canada.  His nickname was based off a plane that flies in the air.  He is a human that can fly, I cannot imagine how cool that must feel.

Remember that dunk contest Vince was in, you know what I’m talking about.

Turns out all of those dunks were made up on the spot.  He tells a story of how he used all his dunks he was going to do when he was in the layup line.  One of the most famous dunk contests in NBA history was created on the spot.  They say you can be an artist at anything.  Vince Carter is the Pablo Picasso of dunking.

Here is a little fun fact for ya, Vince Carter co owned the first night club to have bottle service in Toronto.  The Toronto nightlife was not known to be very active.  Vince changed that.  NBA players were rolling into town and wanted a place to party.  Vince took the partying from the USA and brought it to our friends up North.  What a guy.

Another little fun fact, him and Steph Curry used to play 1 on 1 when Steph was just a wee little guy.  Towards the end of Dell Curry’s career, he made a quick stop to play with the Raptors.  Vince would play with Seth and Steph after practice when they were younger.  I would imagine Steph had no problem making 30 foot jumpers as an 8 year old.

A little less fun fact, Vince Carter was booed the first time he came back to Toronto.  This I found fascinating, I always just assumed he was very beloved in Toronto.  Turns out he left on a bad note with the fans and management and fans showed up with jersey with his number crossed out.  He was booed mercilessly.  It was not until his return to Toronto with Memphis that he was finally given the ovation he rightfully deserved.

Overall, it was a very well done documentary about a basketball player that brought both Toronto and dunking to the forefront of basketball.  To no one’s surprise, Mr. 6 himself, Drake is a big part of this documentary.  When you’re hungover Sunday morning or if you got an hour to spare this weekend, pop this bad boy on.  You will not be disappointed. I guarantee it.