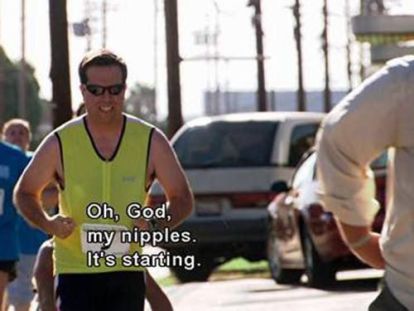 The 122nd Boston Marathon will take place later today.   Almost 30,00 runners will participate and run the 26.2 miles in one of the most historic races in the country.  The best part about it, every single one of them will let you know they ran in the marathon.  No seriously, every single person that runs in that Marathon will tell every person with ears that they ran in the Boston Marathon.

Running a marathon is no easy feat, majority of the population could not roll out of bed and run for 4+ hours.  I respect every single person that dedicates hours and hours of their time to train for this event.  It is an incredible feat that should definitely be noticed and every single person who participates deserves that recognition.

Alright, that was enough nice things about marathon runners.  Let’s discuss how I actually feel about them.

Marathon runners are the absolute worst.  Plain and simple.

Not every marathon runner sucks, I know a couple people that have run marathons and they decided to act like a normal human being about it.  They let others congratulate them instead of constantly seeking attention.  Unfortunately for them, 95% of marathon runners like to tattoo their accomplishments on their forehead.

This is the car of majority of marathon runners.  Let’s start off by plastering stickers all over your car showing that you ran a marathon.  Every car around you surely cares about your time in the 2013 Chicago Marathon.  Hell, toss on the 13.1 sticker while we’re at it.  Putting the 13.1 sticker on your car just tells me that you half ass everything throughout your life.

This brings me to my main point of why these people suck.  They feel the need to broadcast to the world their accomplishments.  They post on social media throughout the entire 6 month training process.  They are going to let you know about those blisters they got from that run back in February.  You know why?  Because you care about their times and struggles throughout all of this.  NO ONE CARES ABOUT YOUR SPLITS CAROL!

I do not understand why this group of people feels the need to do this.  If I hear you ran in a marathon, I will congratulate you.  As I stated earlier, that is an accomplishment and takes a lot of dedication.  Let me do that though, don’t force me to by shoving your mile times down my throat on Instagram daily.

The absolute worst part about all of this, the group of people who are usually boasting about their marathon tribulations most likely aren’t in shape to begin with.  You do not have to be in the best shape to run for a long amount of time.  That is the most troubling part, a lot of people will run the marathon and then continue on their unhealthy lifestyle once it is finished.  You put in all this time and effort to better yourself by running a marathon, why then throw all that away by ignoring your health after.

That is all. Best of luck to those running marathons in the coming months.  I hope you all finish and let others congratulate you.  We know that won’t happen, I toss in a link below for your new sticker to add to your car!