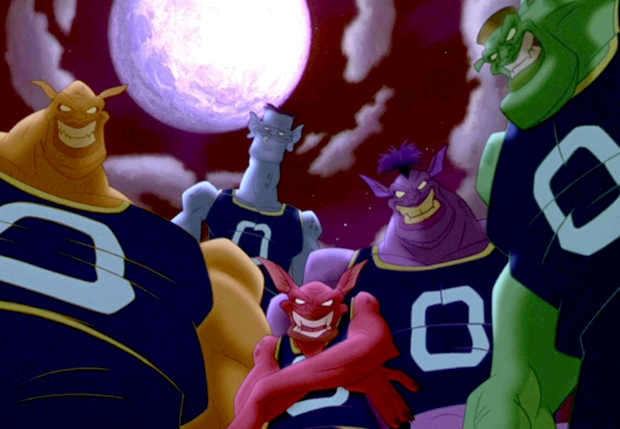 With the NBA All-Star weekend set to kick off tomorrow, I think it is very important that we tackle the hard hitting subjects.  It has been a very exciting, dramatic NBA season thus far but it is time we answer the most pressing question of them all.  Who would suit up in a battle vs. the vaunted Monstars?

Now the Monstars are no walk in the park, if it wasn’t for Michael’s Secret Stuff he may still be on Moron Mountain.  Speaking of Michael’s Secret Stuff, Bugs Bunny does not get enough credit for that.  Without him noticing the mundane mood in the locker room, the Tune Squad would have just laid down and let the Monstars have their way.  Michael tried to pump them up with a pep talk but that did absolutely nothing.  Bugs had the wherewithal to muster up this grand plan with a fake pump up tactic and damnit it worked.  Good work Bugs, you are the real hero here.

Back to the lecture at hand, the question is who would play in this game from today’s All Star squad.  Here is the team I would roll with:

The man long rumored to be in Space Jam 2 will be leading my Tune Squad.  Yes, everyone gets mad that he is even being considered for such a role but there is a reason why.  He would be the leader of my team, no questions asked.  He could take over the game if he needed but also could facilitate if need be. He also would provide something that the Tune Squad really lacked, defense.  I think being able to stop the Monstars could lead to more fast break opportunities.  Welcome aboard Bron Bron.

In order to compete with creatures from out of this world, I must have one of my own.  Fight fire with fire.  Giannis is not human, I need someone that will put the Tune Squad in awe.  Giannis is that person.  The second he dunks over that goofy blue character, the Monstars will not know what hit him.  I am picking Giannis solely for the wow factor, suit up Freak.

Ok, I have my freak and my leader now it is time to add some cold blooded assassins to my team.  Russell Westbrook is that dude.  He does not care about anyone.  He will throw down ferocious dunks on anyone who is in the way.  He is extremely petty so I am sure he will not like the way the Monstars handled just taking away skills from other NBA Superstars.  I also will have Kevin Durant just sit on the sideline to fuel the fire.  There isn’t much more to say about Russ, he provides the killer edge that I need. Plus, this guy is so god damn annoying…

Russ would not stand for the pestering of this punk.

Draymond Green is a bad baaaaad man.  He is another person that does not care about others one bit.  He will pull the dirty moves that will be needed down low.  I fully expect him to throw a few cheap shots below the belt, intimidation at its finest.  I need a big body down low and Draymond is not afraid to get physical at all.  Draymond will absolutely have his way with this lanky buffoon…

I imagine a few minutes in the game versus Draymond and a posterizing dunk by Giannis will lead to this dork grabbing some pine real quick.

One thing I noticed was lacking from the Tune Squad’s game plan was shooting.  This boy will for sure take them by surprise.  Steph is here simply to spread the floor.  The game will start with him launching multiple 3’s from wherever he chooses.  The Monstars will not know what him them, they will then be forced to somehow attempt to defend this.  This will lead to all sorts of chaos.  Steph will actually be my X factor.  I will hit the Monstars where they never expect to be hit. Blouses.

And that is my team.  With the gameplan I have assembled, I do not see this even being a match.  Stretch the floor with some shooting, play relentless defense, beat them up down low, and wow them.  This one will not be a contest, enjoy Moron Mountain ya chumps.