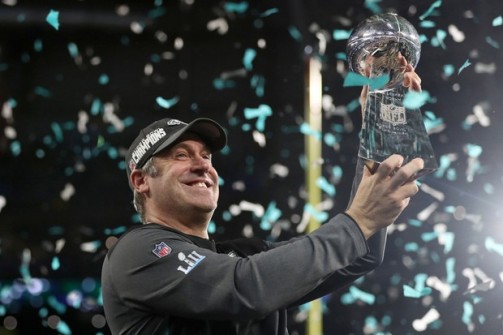 Philadelphia, DO NOT burn the city to the ground.  I have even better news for you guys after winning your the Super Bowl.  This can be the start of something great.  You are champions of the world and there could be many more where that came from.

The Eagles won their first Super Bowl in franchise history Sunday evening.  Second year coach Doug Pederson brought out all the tricks including a play that saw Super Bowl MVP Nick Foles catch a touchdown.  Many will question why Bill Belichick did not play Malcolm Bulter at all but this article is about the Eagles moving forward.

This may be a hot take but nowadays you can’t make news without a hot take so here goes nothing.  This could be the start of a dynasty in Philadelphia. They just won the Super Bowl and I am drinking the kool-aid but stay with me.  Below is a list of key players on their roster and how long they are under contract for:

That is a very impressive list of players that are all locked up for multiple seasons moving forward. Howie Roseman has done an incredible job creating this roster, there is no reason to think he won’t continue to build upon this. Now there could be some issues for the Eagles when it comes to cap space for next season.  As it stands right now, the Eagles will be $9.2 million over the cap this offseason.  There are a few different things they can do to free up some cap space as they will likely have to sign Brandon Graham to an extension.  He could sign a backloaded extension which could free up some cap space for Philly this season.

Another route they could take is shopping their Super Bowl MVP.  Nick Foles performed well enough in Carson Wentz’s absence to earn a starting job in this league.  The good news for Foles and the Eagles, there are always teams who could use a quarterback.  They could end up flipping their backup quarterback for a few draft picks.  This also will help them with their dynasty pursuit.

The landscape of the NFC East is wide open in my opinion.  The Giants have hired a new coach, a new GM, and will likely be grooming a new quarterback in the next few years. The Redskins decided it was a good idea to hitch their future to an aging Alex Smith for the next few years.  The Cowboys always have drama and currently are having contract issues with their star receiver.  There also are no teams in the NFC that are extremely established.  The Rams are up and coming and will likely challenge the Eagles yearly in the playoffs.  The same is to be said about the Vikings but what they do at quarterback will say a lot about their future going forward.

I am not saying it is a certainty that this team in Philadelphia is the start of a dynasty.  Looking at the players they have locked up long term, the system that Doug Pederson has built, and the promise of Carson Wentz it is hard to not think they have something special brewing in the city of brotherly love.