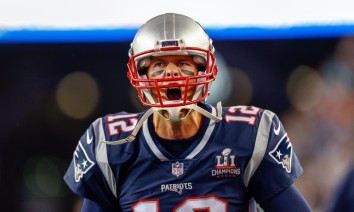 With Tom Brady headlining majority of the conversation this week, I figured why not revolve the Eliminator Friday around the GOAT.  This my friends, is the greatest of all time eliminator. You will be eliminating this player from existence completely.  For argument’s sake, we are going to assume their team performs exactly the same without them.  We also know that all of these athletes are extremely decorated so I am going to base my opinions solely off who I like the most honestly.  It was very difficult to choose a baseball player that people wouldn’t automatically eliminate so I chose the Captain.

Also I think these are some of the greatest athletes in my lifetime so understand Babe Ruth was left out for obvious reasons. Without further adieu, your eliminator.

He kissed his son for a long time, get over it.  Tom Brady is the man.  His wife makes more money than he does and is better looking than him.  If you didn’t know Tom Brady is a multi millionaire and has been on the cover of GQ multiple times.  Let that sink in real quick, you are a professional athlete who is known for being good looking.  Your wife is more successful than you in both of those categories.  He is the quarterback every fan wants under center.  He has the underdog story of being drafted with pick #199 and is now the greatest QB of all time. You simply cannot eliminate Tom from this for so many reasons.  Do the right thing, leave Tom’s name off your lips.

This one strikes very close to home for me.  I love Derek Jeter.  He is one of my absolute favorite athletes of all time.  I have read his autobiography multiple times.  I wore #2 when I was a kid.  I played shortstop. I wanted to be Derek Jeter.  I still want to be Derek Jeter. Well maybe not right now, people around baseball don’t seem to like him too much. Derek Jeter is someone who was thrust into the spotlight at a young age and did not let it blind him.  He was the face of one of the most stories franchises in sports in the media hotbed of the country.  He dated supermodel upon supermodel upon supermodel.  He never did a thing wrong. He gives his lady friends gift baskets after staying the night.  What a god damn Casanova.  I cannot eliminate Derek Jeter simply because of my bias.  I understand if he is the one you part ways with but just know you are parting ways with the definition of class.  Let that one sit on your conscience.

There was a time when Tiger Woods had the sports world by the balls.  When people thought of golf they thought of Tiger Woods.  As a matter of fact, Tiger Woods was golf.  The most impressive thing in this entire article may be that.  People didn’t watch golf, they watched Tiger.  They tuned it to watch him tear apart golf courses and then bury his opponents.  He was as dominant as they come.  He has since gone pretty much off the rails due to various injuries and off the course drama.  He is in the middle of what seems like his 10th comeback but I personally am rooting for him.  Golf is better when Tiger is in the mix and if you can’t see that then you are just being ignorant.  For me, this is going to be the athlete I nix.  I thoroughly enjoy Tiger and have nothing against him.  I was just never obsessed with him as the fanboys are and the others I just can’t cut.

I will keep this one brief.  I am from Chicago, I am a very big Bulls fan.  I grew up watching the 90’s Bulls. I would be crucified from every single person I know if I chose this man. Michael Jordan, much like Tiger Woods, was basketball for that entire decade.  His logo has transcended his career.  He has over 1 billion dollars. He had a commercial and song made about how everyone wants to be him.  I’ll send you off with that…