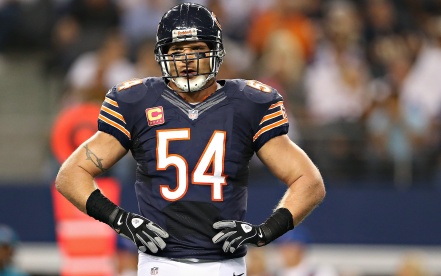 For the sake of this article, we are going to assume that 5 players will receive 80% of the vote.  The only surefire locks are Randy Moss and Ray Lewis in my opinion.  Brian Urlacher deserves to be a surefire lock as well.  Let me tell you exactly why the face of the Chicago Bears for the last 15 years deserves to be in.

Brian Urlacher was freakishly athletic.  He played both safety and linebacker in college and tested off the charts at the combine.  He ran a 4.57 40 which at the time was unheard of for a linebacker.  At 6’4″, 250 pounds Brian Urlacher was about to set a new standard for size and athleticism for linebackers in the NFL. In need of a defensive playmaker, the Bears drafted him 9th overall in the 2000 NFL Draft.

In that 2000 season, he was named Defensive Rookie of the Year.  He went on 2 years later to receive NFL Defensive Player of the Year honors in 2005.  He was named to the Pro Bowl eight times, named first team All-Pro four times, led the Bears to four division titles, and one Super Bowl appearance in 2007.  The Bears got absolutely destroyed by Peyton Manning in that game but that Devin Hester return was really something else.  I can’t imagine a more exciting start to a Super Bowl when your team is in it.  God, that was electric.

Brian Urlacher led some of the most premier defenses in the NFL throughout his career in Chicago. Those vaunted Chicago Bears defenses finished top-five in points allowed four times (2005, 2006, 2010 and 2012) under #54.  Urlacher retired with 41.5 sacks and 22 interceptions. He recorded 100-plus tackles in nine of 13 seasons in the NFL.  The only reason he didn’t bat 100% in this statistic, injuries in those 4 seasons.

The Hall of Fame is supposed to be the greatest players at each specific position.  Brian Urlacher surely is one of the greatest linebackers ever to play the game.  He carried himself with complete class, rarely had any off the field issues, and was the leader that coaches across the league yearned for.  Many players since the finalists were announced has praised this man saying he absolutely belongs to be a first ballot Hall of Famer.

The one thing that could hurt Brian’s chances is Ray Lewis.  It is very rare for multiple players fro the same position to be selected in their first year of eligibility.  The only examples from the modern era are at quarterback with Troy Aikman and Warren Moon in 2006 and Dan Marino and Steve Young in 2005.  Personally, I do not think this should matter.  These two are two of the greatest linebackers in the history of the game, Brian Urlacher should not be punished because Ray Lewis is also on the ballot for the first time.

Brian Urlacher, you are a first ballot Hall of Famer in my eyes and every Chicagoans eyes.  You exemplified Chicago Bear football for 13 years and did it with a great sense of pride.  I only ask you one thing when you step to that podium in Canton, shave your head.  I understand you are getting paid a lot to show off that fancy new hair, but go into Canton the bald badass we all remember you as.  Now welcoming your 2018 NFL Hall of Fame inductee, Brian Urlacher.