Late Monday night, it was announced that the Washington Redskins had traded for former 1st overall pick Alex Smith.  The Kansas City Chiefs will receive a 3rd round pick and Kendall Fuller as compensation for Alex Smith.

This move makes sense for the Chiefs, they drafted Patrick Mahomes with the 10th overall pick in the 2017 draft.  He is their quarterback of the future and Alex Smith has 1 year left on his deal.  The Washington Redskins and Kirk Cousins were never a good match.  He has been franchise tagged multiple times, performed above expectations, and never received the long term deal he was looking for.  Washington instead will move forward with a soon to be 34 year old Alex Smith as their franchise quarterback, to each their own I guess.

Kirk Cousins will now be a free agent searching for that big contract.For the sake of this article, I am just going to assume all of these teams can afford him.  Here are some of the teams I think could sign him as well as a couple far fetched but awesome landing spots:

This is the most likely landing spot for Kirk.  Ever since Peyton Manning left, the Broncos have been searching to fill that franchise quarterback void.  They have toyed around with Trevor Siemian and Paxton Lynch but neither have proven taken a strangled hold of the job when given a chance.  They have a top 5 defense when healthy and weapons in Demaryius Thomas and Emmanuel Sanders.  John Elway will for sure be giving Kirk a ring this morning

The Cleveland Browns have NEVER had a franchise quarterback.  They have had a rotating door at quarterback for years now, I mean look at all these failed attempts 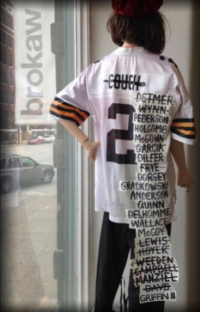 And there are more quarterbacks who aren’t even on that list! Instead of drafting a quarterback and taking another risk, the Cleveland Browns should open up their wallet and pay a proven franchise quarterback.  They have two top 5 picks in the 2018 draft, they can take Saquon Barkley and a top cornerback with those two picks.  Kirk Cousins with Saquon Barkley at running back and Josh Gordon to throw to.  Kirk Cousins looks good on you Cleveland, REEAAALLLL GOOD.

The Arizona Cardinals do not have a quarterback on their roster at the current moment.  Carson Palmer retiring has left Arizona in a predicament when it comes to the man under center.  Signing Kirk Cousins would provide stability while this team revamps their team a bit.  I only think Kirk would sign here if he knew Larry Fitzgerald would be around for a few more years.  I do not think that will be the case so honestly I do not see Kirk signing here.

The New York Jets actually were not that much of a laughing stock last year.  Their quarterback play was decent at times but moving forward the Jets should not be trusting in Josh McCown, Bryce Petty, or Christian Hackenberg.  Kirk really would not have a lot of talent to throw to besides Robby Anderson.  He just said some vile things to a police officer while going 105 mph so I do not know how much we can trust him.  I want Baker Mayfield to get drafted here because I think his personality with the New York media would result in gold. That’s gold Jerry, gold! Baker to the Jets, Kirk doesn’t want to go to this firestorm franchise anyways.

These next two are dream scenarios for Kirk, although highly unlikely they would be awesome

Kirk Cousins throwing to Odell Beckham Jr.  Imagine that for a hot second, it is beautiful.  Kirk Cousins thrived when DeSean Jackson was in Washington.  I think the Giants will draft a quarterback with their #2 pick and ride Eli Manning out until he decides to hang it up.  I think this would be an awesome fit with Odell and Evan Engram but I think the franchise will go in a different direction.

Ian Rappaport reported on Tuesday that the Jacksonville Jaguars were going to stick with Blake Bortles moving forward.  Blake Bortles deserves it, he came up big in the second half of the season.  He deserves a good contract after the year he had.  That doesn’t mean we can’t imagine how awesome it would be for the Jaguars to sign Kirk Cousins.  They will be losing Marqise Lee and Allen Robinson to free agency but Dede Westbrook and Leonard Fournette at least make that offense exciting moving forward.  Pairing Kirk with the best defense in the league would be amazing.  He would be able to play almost care free knowing that the defense will make up for any mistake he makes.  Obviously this is not likely to happen but God it would be awesome