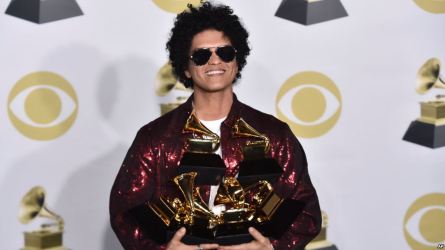 I have yet to even mention his performance with Cardi B of their remix of his song “Finesse”. ELECTRICITY. ALL OVER THE PLACE.  I am here to tell everyone reading this, WE’RE NOT WORTHY WE’RE NOT WORTHY.  For all you young whipper snappers out there, that is from Wayne’s World.  Find a way to watch it this week, I promise it is a funny movie.

Bruno Mars is as close to Michael Jackson as it gets when it comes to performing, his performances have turned into appointment television.  For those who missed last night’s performance, take a look below.

Bruno has been long known for his soothing voice but right around the 1:45 mark you see what makes his performances must watch television.  He seamlessly breaks into dance moves similar to Michael Jackson.  As a caucasian male, I wish I could pull off one of these moves.  Just one.  Not to mention once Cardi B reappears, Bruno goes right into Michael Jackson’s signature moonwalk without blinking.  Also, those Off White x Nike Air Prestos are so sexy.

In my opinion, Bruno Mars has completely taken off the last few years.  He had a lot of poppy radio songs early on in his career but has created his own unique sound recently.  He also has come out with some amazingly underrated music videos off his last album, 24k Magic and That’s What I Like are both artistically brilliant.

That video is mesmerizing, I still don’t exactly understand how it was made.  Did he just dance and they created all the visuals around his dancing?  If someone can explain this video to me, I would really appreciate that.

I will send you all off with a couple more of Bruno’s best live performances.  If you really want to get your Monday off to a hot start, go down the Bruno rabbit hole.  Quick warning though, I would advise against watching any Versace On the Floor live performance.  That could lead to some strange feelings while sitting at your cubicle…

P.S. His voice actually might somehow be better than his performing ability. I am not exactly sure how but that is a topic for a completely separate blog at this time.